Abstract
Pleomorphic adenoma is the most common tumor associated with the salivary gland. These tumors are derived from a mixture of ductal and myoepithelial elements and rarely develop in the jawbones. Regardless of the site of origin, pleomorphic adenoma presents as a painless, firm, and slow-growing mass, which is often misdiagnosed as an odontogenic cyst when located in the tooth-bearing areas of the jaws.
Keywords: Diagnostic errors; Neoplasm; Pleomorphic adenoma

Salivary gland tumors account for approximately 3% of all head and neck tumors. Pleomorphic adenoma is the most common type. Although pleomorphic adenoma primarily affects the major salivary glands, such as the parotid gland, it can occur in minor glands. Ectopic salivary gland tissue has been identified at various sites such as the skin, neck, hypophysis, mediastinum, prostate, rectum, vulva, thyroid gland, mastoid bone, middle ear, maxilla, and mandible [1]. However, benign intraosseous salivary gland neoplasms of the jaws are rare, with only a few reported cases. In the tooth-bearing area of the jaws, the bone defect often overlaps with the tooth apex and can be confused with many pathological conditions [2]. This report aimed to describe a recurred intraosseous pleomorphic adenoma mimicking the odontogenic cyst and investigate its radiologic appearance with clinical features using cone-beam computed tomography (CBCT).

A 44-year-old female visited our clinic after accidentally observing a swollen upper lip. Clinical examination revealed mild swelling with tenderness on the right upper lip area. The panoramic radiograph revealed ovoid-shaped radiolucency, which was located beneath the apexes of the lateral incisor and canine (Fig. 1). Similar features were observed on CBCT. A radiolucent lesion surrounding the apexes of the upper anterior teeth displaying cortical perforations was observed (Fig. 2). It was diagnosed as an odontogenic cyst. However, the patient had a history of an operation for excision of pleomorphic adenoma in the same area 7 years ago. We decided on surgical exploration and biopsy to avoid the possibility of recurrence. Surgical exploration was performed from the buccal mucosa of the swelling area. Incision and mucoperiosteal flap elevation were performed, and cortical perforations in the buccal bone were observed. No cystic lesion was noted; however, soft tissue neoplasm was observed (Fig. 3). A small amount of tissue was excised for histologic examination. The histopathologic examination revealed pleomorphic adenoma. 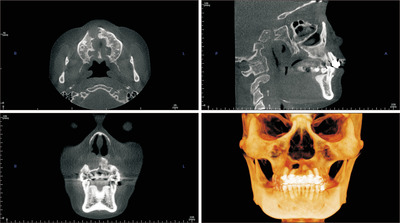 Fig. 3. Intraoperative photos reveal the lesion (A) and the defect (B) on the right upper jaw with surgically excised lesion (C).

After biopsy, the patient received endodontic treatment for the involved teeth. During the operation, enucleation of the main tumor and apicoectomy of the involved teeth were performed, and an absorbable collagen sponge was applied to the defect area. The buccal and palatal bones were penetrated by the lesion. To distinguish the origin of the mass, the adjacent palatal tissue in addition to the main mass was excised for histologic examination. The microscopic appearance of the excision specimen was similar to that observed using incisional biopsy, and the diagnosis of pleomorphic adenoma was confirmed. However, histologic examination of the palatal tissue revealed no tumor or fibrosis occurrence. There was uneventful healing and no tumor recurrence during the 9-month postoperative follow-up period.

The study was approved by the Institutional Review Board (GCIRB2016-199).

Pleomorphic adenoma can occur in the minor and major glands. However, its occurrence in the jaws is rare. It can be misdiagnosed as a cystic lesion when superimposed with the tooth apex in the jaw and cannot be easily distinguished from other pathologies in panoramic radiographs and CBCT scans because of its location and radiolucent feature. In the present case, an operating surgeon misdiagnosed the adenoma for an odontogenic cyst during the first operation 7 years ago. Thus, enucleation for the lesion was performed because of its radiologic features. Histological diagnosis concluded that the excised mass was a pleomorphic adenoma. Because the patient had a history of an operation in the same region, we first performed surgical exploration and incisional biopsy. The biopsy result showed the occurrence of recurrent pleomorphic adenoma. Facial magnetic resonance imaging was used to clarify the boundary of the tumor mass. After the routine endodontic treatment of the involved teeth, thorough enucleation of the mass and apicoectomy were performed during the operation.

Pleomorphic adenoma arises from the salivary gland tissues or sites with such tissues. The occurrence of pleomorphic adenoma in other locations, such as the middle ear, mastoid, nose, cervical lymph nodes [3-5], regions of the head and neck, extremities, trunk, and genitals, while sporadically described, is extremely rare. Reports of pleomorphic adenoma originating centrally within the jaws are exceedingly rare. In this case, the patient underwent an operation for pleomorphic adenoma at the same place 7 years ago. The main tumor at that time was also located in the jawbones. The possibility of its origin from the minor gland tissue of the palate could not be ruled out. The most common site for pleomorphic adenoma occurring in the minor salivary glands is the palate [6]. However, no clinical findings regarding the palatal manifestation of tumors at the visit are available. In the present case, additional histologic examination of the palatal tissue could help differentiate it from palatal origin. Histologically, the adjacent palatal tissue presented no tumor or fibrosis. Thus, this tumor is reasonably assumed to be intraosseous pleomorphic adenoma.

Pleomorphic adenoma produces recurrence owing to spillage, inadequate removal, or enucleation at the time of operation but is not known to produce distant metastasis [7]. A recurrence rate of 2%–44% has been reported in the literature [8]. The ideal treatment of choice for pleomorphic adenoma is wide local excision with the removal of the involved periosteum or bone. Although thorough enucleation of the mass was performed in this case, the patient should be checked periodically for the recurrence of the disease.