Iron is an essential nutrient for the growth of bacteria, and iron is needed for various biochemical and physiological responses of bacteria [1-3]. Oral streptococci that reside in human oral cavity are gram-positive bacteria and play an important role in plaque formation [4]. Some of them cause dental caries and infective endocarditis [5,6]. , also known as the causative bacteria of dental caries, require iron to grow [7]. Therefore, the growth of oral streptococci can be attributed to the ability of bacteria to acquire iron.

Congo red was reported as one of the identification markers used to distinguish the toxicity and harmlessness of certain bacteria [20]. For example, in vitro experiment on showed that the ability to bind Congo red and heme compounds was associated with virulence [20]. In addition, strains bound to Congo red in were toxic, and strains that did not bind to Congo red were found to be harmless in various systems [20].

In this study, the binding of Congo red was analyzed in oral streptococcus, , one of the early colonizing bacteria in dental plaque formation.

DL1 was cultured on a Todd-Hewitt agar plate (Bectron Dickinson Biosciences, Franklin Lake, NJ, USA) for 1 day at 37°C in a CO2 incubator containing 5% CO2, transferred to a Todd-Hewitt liquid medium and incubated for 18 hours.

After binding of DL1 to hemin, the Congo red binding was analyzed and the relationship between the hemin binding and Congo red binding of the bacteria was confirmed. First, 1 mL of bacterial suspension (1×1010 cells/ml) and 0.5 mL of hemin (final concentration 0–30 μg/mL) were incubated in a 37°C water bath for 30 minutes. Thereafter, the bacterial pellet obtained by centrifugation (12,000 ×g, 4°C, 10 minutes) was washed twice with PBS and resuspended in 1 mL of PBS. This was incubated with 0.5 mL Congo red (final concentration 30 μg/mL) in a 37°C water bath for 30 minutes. After centrifugation (12,000 ×g, 4°C, 10 minutes), the OD value of the supernatant was measured with a spectrophotometer at 488 nm [21]. 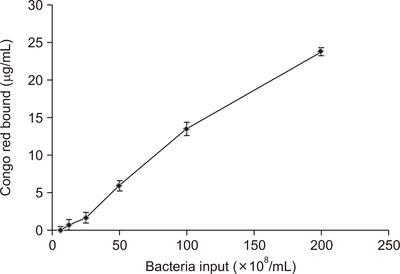 Fig. 1. Effects of bacterial concentration on Congo red binding of DL1. (0–200×108 cells/mL) were incubated with hemin at 37°C. After incubation of the mixture for 30 min, bacteria were removed by centrifugation, and the amount of hemin bound was determined by measuring the amount of dye remaining in the supernatant. Values indicate means of duplicate experiment and the error bars indicate standard deviations of the mean. 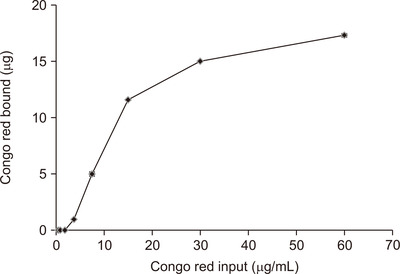 Fig. 2. Effects of Congo red concentration on Congo red binding of DL1. The reaction mixture contained 1 mL of bacterial suspension (OD660=1.5) and 0.5 mL Congo red (final concentration 0 to 30 μg/mL). After incubation of the mixture at 37°C for 30 min, bacteria were removed by centrifugation, and the amount of Congo red bound was determined by measuring the amount of dye remaining in the supernatant. Values indicate means of duplicate experiment and the error bars indicate standard deviations of the mean. Because the standard deviation value is too small, the error bar is obscured by the point. 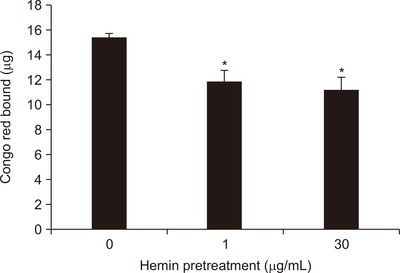 Fig. 3. Competition assays between hemin and Congo red binding to . Hemin were allowed to prebind onto the cells, and the excess was removed by washing with PBS, followed by the addition of Congo red (final concentration, 30 μg/mL). Amount of Congo red bound to bacteria was measured with spectrophotometer. Values indicate means of duplicate experiment and the error bars indicate standard deviations of the mean.
PBS, phosphate buffered saline.
The significant -values (<0.05) are indicated by *.