In periodontal therapy, treatment of furcation has been one of the most challenging problems. Although it is desired to maintain the furcation lesion as a conservative treatment, the furcal lesions are prone to recurrence. Thorough debridement and maintaining a good cleaning environment for a long time at the furcation is also challenging. Various treatment methods have been tried to resolve furcation involved molars, including nonsurgical therapy, regenerative technique, anti-infective therapy, root conditioning, root resection and extraction [1].

Today, implant treatment is popular as replacement for missing teeth. However, if the patient dose not accept the transition to extraction and implant for various reasons, or is strategically important in prosthetic planning, or if other treatments are not available, another therapeutic option is necessary. Root resection is one of the treatment that resolve furcation involvement and preserve teeth [2]. Through root resection, furcation involved molars can be replaced with unaffected teeth like single-rooted tooth, and it also makes easier to remove plaque that maintain good oral hygiene. In addition, it is possible to facilitate subsequent implant surgery by preventing the absorption of surrounding alveolar bone and periodontal tissue while remaining the residual root and promoting the recovery of the alveolar portion of the removed root [3,4].

Basaraba [5] defined the indications of root resection as follows. 1) A tooth is crucial importance in the treatment plan, such as used as an abutment for fixed or removable dentures. 2) A tooth with sufficient attachment necessary to function. In the case of a molar with advanced bone loss, only 3-wall bone defect can be treated as root resection. 3) Prediction of treatment outcome is difficult or there is no cost-effective treatment. 4) Patients with excellent oral hygiene and low caries activity.

According to a recent retrospective study on the long-term survival rate after root resection, the resected tooth was preserved and functioned in the oral cavity for a long time [6,7]. Derks et al. [7] examined 90 root resected molars in 69 patients for 4–30 years, and median survival time was 20 years. In terms of prognosis, root resection has a failure rate of 11% for 7 years [8], whereas posterior single implants have a failure rate of 3% to 5% [9,10], showing a better prognosis. However, root resection has an advantages in that it preserves the teeth without extracting them, and that the patient's satisfaction can be greater.

Maxillary molars are multi-rooted teeth that have usually three roots. The furcation of maxillary molars may be invaded on the buccal, mesial, or distal aspects [11] and the interradicular space is inaccessible for proper maintenance. Ross and Thompson [8] reported that the probability of affecting the furcation of maxillary posterior is three times that of the mandibular posterior region. But, the furcation involvement itself should not be considered an unfavorable prognosis, and it should be considered along with other factors such as pocket formation, alveolar bone loss, and the tooth function. McFall [12] reported that the maxillary second molars are the most common teeth that lost. Various factors such as plaque removal, root anatomy, lack of distal bone support, root proximity, and iatrogenic problems influence the mortality of maxillary posterior teeth.

The study population includes patients who had undergone root resection therapy from December 2008 to October 2015 at the Chonnam National University Dental Hospital, department of periodontology. 68 maxillary molars were resected in 68 patients (40 males and 28 females; mean age: 56.5 years). Exclusion criteria for participants were: (1) preoperative and postoperative follow-up radiographs do not exist, (2) extraction within 1 year after root resection therapy, (3) not followed up for more than 1 year. Patient personal information and general condition were retrospectively investigated through electronic medical record (EMR). The study protocol was approved by the Institutional Review Board at the Chonnam National University Dental Hospital (CNUDH-2016-015) and all participants provided an informed consent form.

Before root resection, root canal therapy was performed by an endodontic specialist. In situations where root canal treatment should be performed after root resection, the cross section of root was treated with calcium hydroxide and endodontic treatment was completed within 2 weeks after surgery based on previous study [13,14]. A full-thickness flap was raised and exposed the involved root and furcation. After cutting the root with a high-speed thin diamond bur, resected portion was extracted. Remaining surface was thoroughly debrided, and smoothed to eliminate irregular ledges. After root resection, the prosthesis was restored and managed according to the maintenance protocol (Fig. 1, 2) [15]. 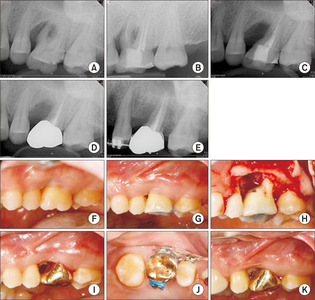 One examiner who did not perform the procedure analyzed the EMR and radiographs of the patients who underwent root resection. In order to protect personal information, the radiographic images were read while the personal information displayed on the picture was deleted. The evaluation variables include preoperative lesions of furcation area, level of the supporting bones of the residual roots, presence of the antagonist teeth, status of the antagonist teeth, presence or absence of the prosthesis of the teeth, splinting with the adjacent teeth. Preoperative radiographs were used to analyze the length of root trunk and root cone, divergence and shape of root cone.

A multinomial logistic regression analysis was performed on the factors affecting success and failure. Fisher exact test was used for failure rate among the population, and Bonferroni correction was performed for post-mortem test. The -value was set to be 0.05 or less as the criterion for significance. Survival rate was calculated using Kaplan–Meier survival analysis via SPSS version 24.0 (IBM Corp., Armonk, NY, USA; BD and PE).

Distribution of the sample

Type and reason for root resection

Comparison of survival and failed tooth

Factors of affecting success and failure

Over a 8-year period, 12 of 68 teeth (17.6%) failed. Based on multinomial logistic regression analysis on the factors influencing success and failure, the type and sex of the resected root had the greatest effect on survival. It is noteworthy that out of the 12 teeth that failed, only 1 case failed in female (Table 3). The highest rate among the reasons for the failure was a decrease in the stability of the periodontal tissue (41.7%). Root resection failure due to root fracture was followed by 25%. There were the fewest failures due to caries (8.3%) (Table 5).

In statistical analysis using Fisher's exact test, it was analyzed that the survival rate was significantly increased when the mesio-buccal (MB) root or disto-buccal (DB) root was amputated than in cases of palatal root amputation (Table 6). The resection of palatal roots of maxillary molars is less common than the MB and DB root resections. In the present study, six palatal roots were resected from maxillary molars, only two were survived, and four were failed. There was no statistically significant difference in survival rate when cutting DB root and MB root. The survival rate was 82.4% up to 8 years of follow-up and mean survival time was 3.95 years using the Kaplan–Meyer survival assay (Table 7, Fig. 3). 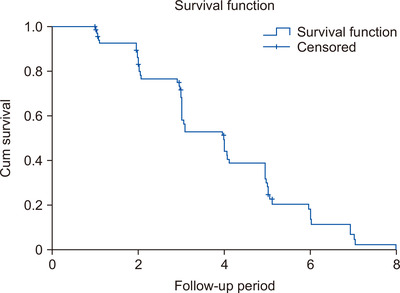 There was only one case of failure in women after root resection. Only 28 female patients was included in the study, so it is difficult to standardize this failure rate due to the small number of samples. The follow-up period is also as short as 8 years, additional follow-up study is necessary. Other studies [6,21] have reported relatively low failure rates in women, but there is no clear explanation. It might be related to the fact that women have relatively weaker occlusal force than men. In addition, Marshall et al. [22] reported that women performed better in dental prophylaxis and brushing. Since the furcation lesions remain after maxillary molar root resection, maintenance ability is very important and has an influence on the prognosis.

A total of 12 maxillary teeth were extracted and of which 6 were due to periodontal problems. It was the highest cause of failure (50%). This rate is comparable with that of Park et al. [25], where 50% of the teeth were lost due to periodontitis. Langer et al. [16] also reported that 54% of failed maxillary teeth had periodontal problems. The maxillary molar is more susceptible to periodontal disease due to its anatomical structure [25]. Resecting one root from the maxillary molar, two roots are maintained and the furcation involvement still remains. And it is easy to leave lips and ledges when the maxillary molar root is resected [26]. It makes difficult for patient to manage plaque control on their own. It can be assumed that the accessibility of the resected site could affect the periodontal status and the survival rate. Therefore, more rigorous maintenance program is required after the root resection of maxillary molar. In this study, according to Merin’s classification of recall visit for the patients, the patients were recalled at 2–3 months intervals in the first year after surgery, and then visited at 3–6 months intervals [27].

Root fracture (33.3%) was the second highest cause of failure. This result was slightly lower when compared with that of Alassadi et al. [28] (39.5%). This high failure rate can be associated with only 17.6% of the resected teeth splinted with proximal teeth. Previous studies [19,23] have emphasized that splinting a resected tooth with an adjacent tooth can have a positive effect on survival rates. In this study, we investigated whether the failure due to root fracture of the residual teeth was related to splinting with adjacent teeth, the effect of the antagonist teeth, and the presence or absence of prosthetic restoration, but there was no statistical significance.

Among the antagonist teeth of the 12 failed cases after root resection, only 1 case was implant. Haraldsson et al. [29] reported that there was no statistically significant difference in occlusal force between the implant-supported fixed prosthesis and the natural dentition. It can be inferred that the status of resected tooth has a greater influence on the survival rate than the type of the opposing tooth. Park et al. [25] also reported that postoperative prosthesis and opposing dentition did not affect the survival rates.

Although there was no statistically significant, survival rate of MB root amputation was higher than DB root amputation. The entrance to the mesial furcation is located at 3 mm toward the apex of the cemento-enamel junction (CEJ), 3.5 mm at the buccal side, and 5 mm at the distal side [30]. This suggests that the furcation fornix is closer to the CEJ in the mesial side and closer to the apical in the distal side. It can be inferred that it is easier to excise the MB root. In addition, there is a depression with a depth of 0.3 mm at the distal surface of the MB root which makes the shape of cross section an hourglass. The transverse sections of DB and P roots are generally round [31]. Therefore, removing the MB root is a form that facilitates oral hygiene management after root resection.

Meanwhile, survival rate of palatal root resection was significantly low. Park et al. [25] reported that the higher failure rate after palatal root resection than other roots in maxilla, but there was no significant difference. Since the palatal root is the thickest and longest root in the maxillary molar, the prognosis after resection cannot be guaranteed. In addition, in order to resect the palatal root, it is necessary to approach from the palatal side. The elevation of palatal flap is more difficult than the elevation of buccal flap due to its thickness and gingival type, and it is also difficult to secure a field of vision during surgery, which makes more difficult to resect accurately. Klavan [34] reported that removal of one root did not significantly increase tooth mobility in the case of maxillary posterior teeth.

In terms of tooth preservation and psychological stability of patients, root resection is effective because it is a treatment method that does not remove teeth. Another advantage of a root resection is that it is possible to facilitate subsequent implant surgery by preventing the absorption of surrounding alveolar bone and periodontal tissue by maintaining the residual root, while promoting the recovery of the alveolar portion of the resected root.

In these days, implant treatment is popularized, but as an alternative to maintaining natural teeth, root resection may become a prognostic treatment. Since the possibility of regeneration of the maxillary furcation lesion is limited, root resection can be a good treatment for advanced periodontal disease. For the long-term survival of root resection therapy, comprehensive treatment based on careful examination and diagnosis, and proper maintenance program after surgery should be well matched.