Abstract
Pemphigus-like gingival lesions are common in elderly individuals who are on long-term systemic medications. We report the case of a patient with drug-induced pemphigus-like lesion with severe gingival enlargement who was examined using histological and immunohistochemical methods. A 67-year-old woman with a history of breast cancer and on antihypertensive therapy complained of tumorous gingival enlargement in the left premolar and molar regions of both arches. The involved teeth showed extensive bony destruction, and a malignant tumor was suspected. Cytological examination revealed several round-to-polygonal acantholytic keratinocytes with normal nuclei. Severe gingival inflammation accompanied by extensive acantholysis of the surface epithelium caused multiple erosions and ulcerations in the absence of tumor growth. β-catenin was weakly expressed in the erosive epithelium, whereas LC3 and GADD45 were found to be strongly positive. These findings suggested that the erosive epithelium had slowly degenerated via autophagy and cellular growth arrest. Thus, the erosive epithelium was suspected to be chronically damaged by certain drugs rather than by acute cytotoxic changes. Following drug cessation, the gingival hyperplasia rapidly regressed with simple oral hygiene care and partial gingivectomy. Drug-induced pemphigus-like lesions can be diagnosed using detailed medical history and pathological examinations and should be followed by a conservative treatment.
Keywords: Acantholysis, Drug-induced pemphigus-like lesion, Gingival enlargement

Drug-induced pemphigus was first recognized 20 years ago; however, the mechanisms leading to epithelial acantholysis are still unclear [1-4]. Penicillamine, captopril, and thiopronin can cause acantholytic lesions by a direct toxic or biochemical effect in human skin explants. Additionally, piroxicam, a new non-steroidal anti-inflammatory drug, is also associated with a pemphigus vulgaris-like eruption [5].

Several patients of drug-induced gingival hyperplasia with mild-to-moderate clinical features report in outpatient clinics, but most lesions usually regress after adequate oral hygiene maintenance. Therefore, drug-induced pemphigus is a diagnostic challenge, as no definite clinical feature can differentiate it from its idiopathic counterpart [6,7].

Gingival hyperplasia is seen in 8% to 85% patients treated with cyclosporine [7]. Furthermore, fosinopril, an angiotensin-converting enzyme inhibitor commonly used in antihypertensive therapy, frequently induces a pemphigus-like skin eruption [8]. Another angiotensin-converting enzyme inhibitor, enalapril, a widely used antihypertensive drug, has shown a powerful in-vitro acantholytic effect with a potential to induce pemphigus in genetically predisposed individuals [9]. Skin susceptibility to nifedipine is mostly genetically determined, with some nifedipine-treated patients developing an acantholytic reaction, while others a subepidermal bullous eruption [4].

In this report, we present a case of drug-induced pemphigus-like lesion with severe gingival enlargement mimicking a malignant gingival lesion, which showed spontaneous remission after simple oral hygiene care and partial gingivectomy. We document the detailed clinical features and histopathological and immunohistochemical findings with a review of the literature.

A 63-year-old women visited the Department of Oral and Maxillofacial Surgery at Gangneung-Wonju National University Dental Hospital with a complaint of tumorous gingival growth. Intraoral clinical examination revealed severe gingival hyperplasia in the left premolar and molar regions of both arches, accompanied by the presence of inflammatory exudate and calculus deposition around the gold fixed dental prosthesis in the left maxillary posterior region. The gingiva was severely edematous and enlarged in the interdental region. The patient first noticed the enlargement four months ago, due to severe gingival bleeding and tooth mobility. However, it did not subside with careful tooth brushing and anti-inflammatory therapy. The patient was concerned regarding the possible recurrence of breast cancer, which had manifested seven years ago.

The patient reported that the breast cancer was treated by surgery, followed by chemotherapy. Thereafter, she was prescribed therapeutic drugs for diabetes mellitus and was on antihypertensive therapy using high doses of the calcium-channel blockers nifedipine (Adalat) for more than seven years. The gingival ulceration and enlargement were first evident four months ago, which have progressed gradually since then. 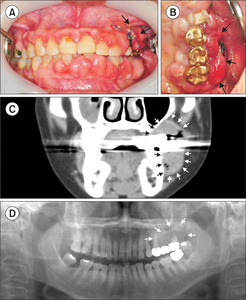 The exfoliated keratinocytes were smeared and observed under a microscope; they were mostly acantholytic, separate from each other, and polygonal in shape, but their nuclear chromatin patterns were almost normal (Fig. 2). These cytological findings were not adequate for establishing a definitive diagnosis; therefore, an incisional biopsy was performed to examine the tumorous gingival lesion. 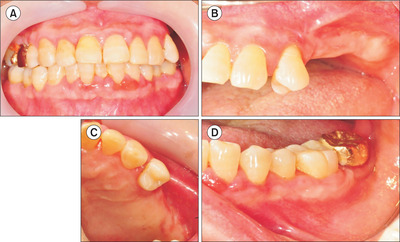 Histopathological analysis revealed that the gingival epithelium was diffusely erosive, and individual keratinocytes were gradually shed with variable features of acantholysis in the spinous cell layer and cleft formation in the superficial cell layer, which was followed by epithelial detachment. However, these epithelial cells showed no atypical nuclear changes (Fig. 3). The underlying connective tissue showed diffuse fibrosis, with the presence of thick collagen bundles, accompanied by a mild inflammatory reaction. In contrast, the erosive and ulcerated gingival areas showed marked chronic inflammatory cell infiltration, suggestive of a granulomatous lesion. No features of neoplastic proliferation were evident in the fibroepithelial gingival lesion. 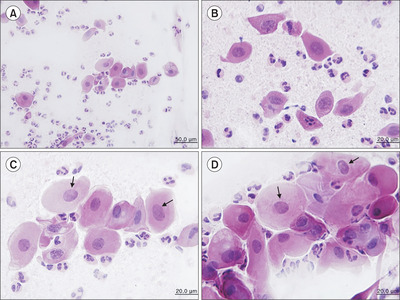 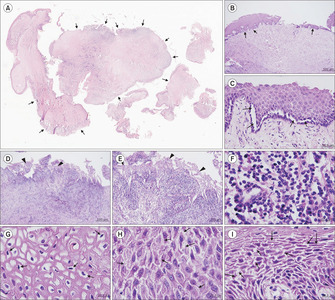 Taken together, the gingival lesion is this case showed severe epithelial acantholysis, concurrent with the loss of β-catenin expression, and intracellular autophagy, indicated by increased expressions of cathepsin G and LC3. These findings indicate that the cellular damage was caused by certain drugs prescribed for systemic diseases, such as hypertension. As the findings of this case were strongly associated with the intake of antihypertensive drugs, the case was finally diagnosed as drug-induced pemphigus-like lesion with gingival hyperplasia.

For the treatment of the gingival lesions, the patient was asked to stop the antihypertensive drug temporarily, after consultation with the patient’s physician. The gingival swelling subsided in a week by simple oral hygiene care. The tumorous gingival overgrowth was excised through partial gingivectomy with extraction of the involved teeth. The postoperative wound healing was uneventful, and most of the gingival hyperplasia had regressed by the five-month follow-up visit.

In this case, severe gingival enlargement was evident in both jaws, which appeared aggressive in radiological analysis as extensive bony destruction around the involved teeth. The areas of gingival enlargement exhibited an erosive epithelium, and were closely associated with the ill-fitting gold prosthesis, which showed poor maintenance of oral hygiene.

Therefore, we speculate that the gingival hyperplasia might have been originated from the erosive and ulcerated gingival epithelium, which was secondarily infected, followed by stimulation of submucosal fibrosis. Additionally, the drug-induced acantholytic destruction of the epithelial architecture could have been the pivotal factor for the progression of gingival hyperplasia to tumorous growth in this case.

Different protein expressions were observed through immunohistochemical staining; the epithelium of the drug-induced pemphigus-like lesions showed severe acantholysis (loss of β-catenin) with activation of autophagy and growth arrest (positive for LC3 and GADD45, respectively). These features differ from those of ordinary cytotoxic damage, such as cellular apoptosis or necrosis, heat-shock protein activation, and cellular survival signaling. Therefore, we propose that the epithelial changes in this case might be more closely related to drug-induced cellular damage than to ordinary cytotoxic damage. Additionally, the clear immunoreaction to TGF-β1 in the stromal fibroblasts might correlate with the severe tumorous gingival hyperplasia observed in this case (Fig. 5). 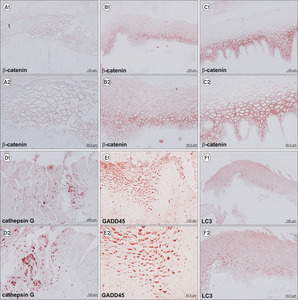 Strong positive immunoreactions to cathepsin G, GADD45, and LC3 were evident in the erosive/ulcerated epithelium in this case, while the immunoreactions to PCNA, HSP-70, and p38 were entirely negative. Therefore, it can be presumed that the epithelial cells were still active and recovering from stressful cellular conditions by the infiltration of macrophages (Fig. 6). 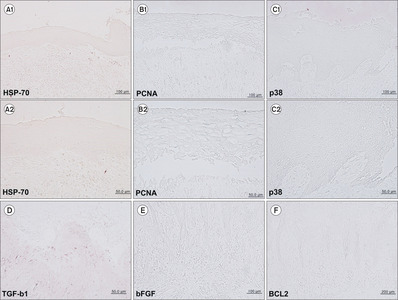 In summary, we presented a representative case of drug-induced pemphigus-like lesion that progressed to severe tumorous gingival hyperplasia. The gingival hyperplasia regressed rapidly by simple oral hygiene care after the cessation of the antihypertensive drug intake, and subsided completely after partial gingivectomy. The histological features of extensive acantholysis and the results of immunohistochemical staining prompted the diagnosis of drug-induced pemphigus-like lesion with severe gingival hyperplasia. The pathogenic mechanism was speculated as acantholysis (down-regulation of β-catenin), autophagy activation (up-regulation of LC3), growth arrest (up-regulation of GADDH), and diffuse stromal fibrosis (up-regulation of TGF-β1) (Fig. 7). The accurate diagnosis of drug-induced pemphigus-like lesion is possible through detailed medical history and pathological examinations, and should be followed by conservative treatment [11]. 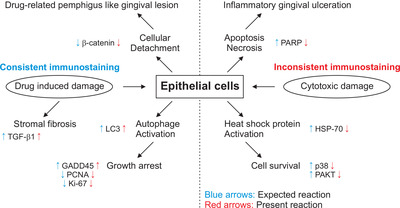 This work was supported by the National Research Foundation of Korea (NRF) grant funded by the Korea government (MSIT) (No.:2018R1C1B5086579).